"Conceived by Duvolle Laboratories, a corporation best known for its ceaseless R&D, the G75-VLB solves many of the problems inherent in mass-manufactured plasma weapons. The result is a weapon that offers improved accuracy and greater containment field stability (which equates to faster, longer bursts of fire) than anything in its class.

It is a magazine-fed, short-to-mid range weapon offering fully automatic fire. Charged plasma munitions are pumped into a cyclotron that converts the plasma into a highly lethal bolt before it is expelled from the chamber. Upon impact with the target, the magnetic field surrounding the bolt collapses, venting superheated plasma onto the contact point."

The Assault Rifle is one of the most basic weapons in DUST 514. A handheld blaster, the assault rifle is a jack of all trades weapon.  Its ability to deal damage at many ranges proves a strength for the weapon.

The Assault Rifle has both Kick (causing the reticule to jump around and gradually get bigger, reducing accuracy) and Dispersion (where accuracy is lost as distance between the target and the attacker increases), although both of these can be reduced by training in Assault Rifle Operation and Assault Rifle Sharpshooter, respectively.

As a Hybrid Weapon, the Assault Rifle has a +10% damage bonus to shields, and a -10% damage penalty to armour.

Items marked with a !? no longer exist and will be removed shortly.

Assault Rifle gunsight from the Closed Beta. (not to be confused with the Mk I sights, images of which have yet to be located) 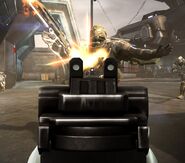 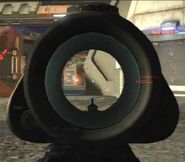